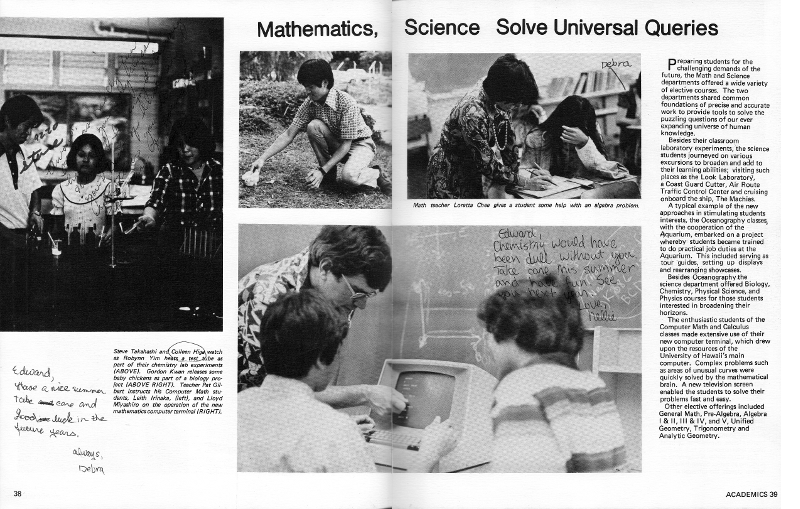 Preparing students for the challenging demands of the future, the Math and Science departments offered a wide variety of elective courses. The two departments shared common foundations of precise and accurate work to provide tools to solve the puzzling questions of our ever expanding universe of human knowledge.

Besides their classroom laboratory experiments, the science students journeyed on various excursions to broaden and add to their learning abilities; visiting such places as the Look Laboratory, a  Coast Guard Cutter, Air Route Traffic Control Center and cruising onboard the ship, The Machias.

A typical example of the new approaches in stimulating students interests, the Oceanography classes, with the cooperation of the Aquarium, embarked on a project whereby students became trained to do practical job duties at the Aquarium.  This included serving as tour guides, setting up displays and rearranging showcases.

Besides Oceanography, the science department offered Biology, Chemistry, Physical Science and Physics courses for those students interested in broadening their horizons.

The enthusiastic students of the Computer Math and Calculus classes made extensive use of their new computer terminal, which drew upon the resources of the University of Hawaii's main computer. Complex problems such as areas of unusual curves were quickly solved b the mathematical brain. A new television screen enabled the students to solve their problems fast and easy.