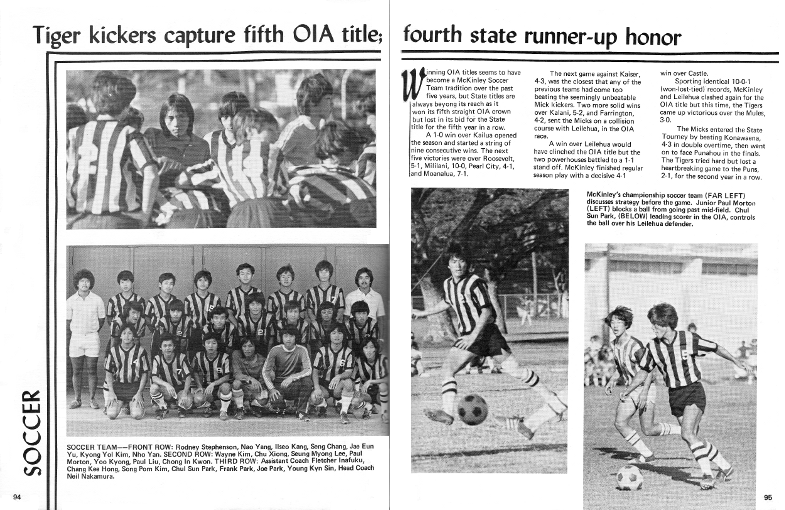 Winning OIA titles seems to have become a McKinley Soccer Team tradition over the past five
years, but State titles are always beyond its reach as it won its fifth straight OIA crown but lost in its bid for the State title for the fifth year in a row.

A 1-0 win over Kailua opened the season and started a string of nine consecutive wins. The next five victories were over Roosevelt, 5-1, Mililani, 10-0, Pearl City, 4-1, and Moanalua, 7-1.

The next game against Kaiser 4-3 was the closest that any of the previous teams had come to
beating the seemingly unbeatable Mick kickers. Two more solid wins over Kalani, 5-2, and
Farrington, 4-2, sent the Micks on a collision course with Leilehua, in the OIA race.

A win over Leilehua would have clinched the OIA but the two powerhouses battled to a 1-1 stand off. McKinley finished regular season play with a decisive 4-1 win over Castle.

Sporting identical 10-0-1 (won-lost-tied) records, McKinley and Leilehua clashed again for the
OIA title but this time, the Tigers came up victorious over the Mules 3-0.

The Micks entered the State Tourney by beating Konawaena, 4-3 in double overtime, then went on to face Punahou in the finals. The Tigers tried hard but lost a heartbreaking game to the Puns,
2-1, for the second year in a row.