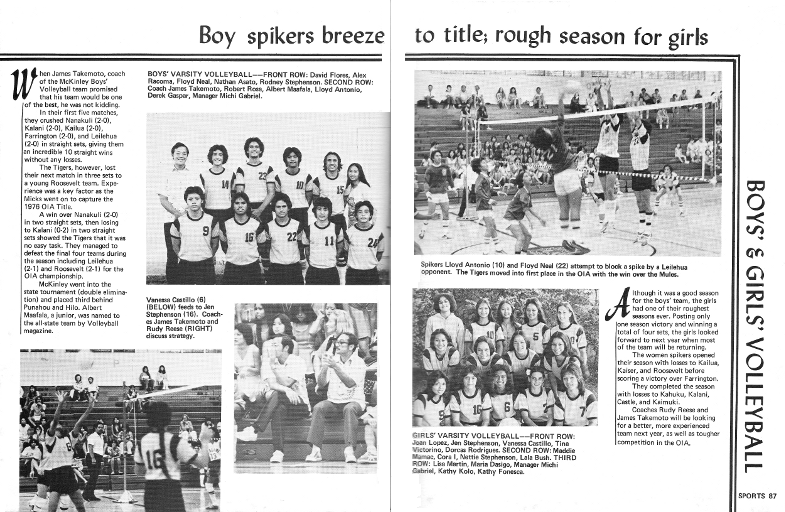 When James Takemoto, coach of the McKinley Boys' Volleyball team promised that his team would be one of the best, he was not kidding.

The Tigers, however, lost their next match in three sets to a young Roosevelt team. Experience was a key factor as the Micks went on to capture the 1976 OIA Title.

A win over Nanakuli (2-0) in two straight sets, then losing to Kalani (0-2) in two straight sets showed the Tigers that it was no easy task. They managed to defeat the final four teams during the season including Leilehua (2-1) and Roosevelt (2-1) for the OIA championship.

McKinley went into the state tournament (double elimination) and placed third behind Punahou and Hilo Albert Maafala, a junior, was named to the all-state team by Volleyball magazine.

Although, it was a good season for the boys' team, the girls had one of their roughest seasons ever. Posting only one season victory and winning a total of four sets, the girls looked forward to next year when most of the team will be returning.

The women spikers opened their season with losses to Kailua, Kaiser and Roosevelt before scoring a victory over Farrington.

They completed the season with losses to Kahuku, Kalani, Castle and Kaimuki.

Coaches Rudy Reese and James Takemoto will be looking for a better, more experienced team next year, as well as tougher competition in the OIA.