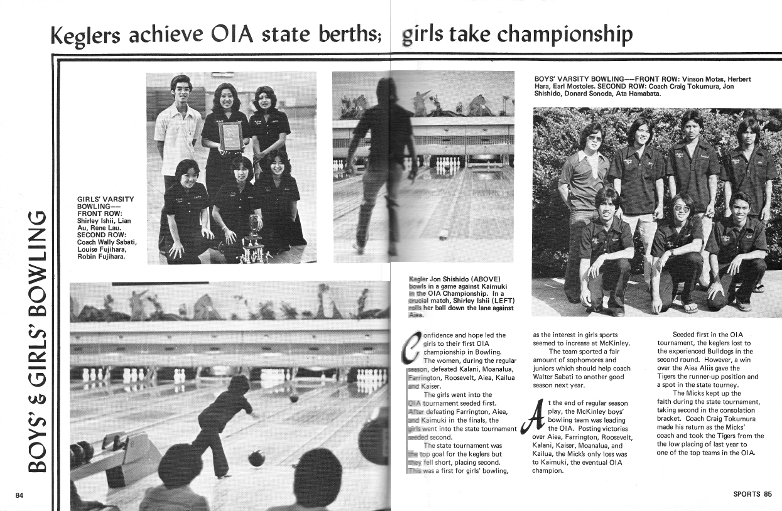 Confidence and hope led the girls to their first OIA championship in Bowling. The women, during the regular season, defeated Kalani, Moanalua, Farrington, Roosevelt, Aiea, Kailua and Kaiser.

The state tournament was the top goal for the keglers but they fell short, placing second. This was a first for girls’ bowling, as the interest in girls sports seemed to increase at McKinley.

The team sported a fair amount of sophomores and juniors which should help coach Walter Sabati to another good season next year.

At the end of regular season play, the McKinley boys’ bowling team was leading the OIA. Posting victories over Aiea, Farrington, Roosevelt, Kalani, Kaiser, Moanalua, and Kailua, the Mick’s only loss was to Kaimuki, the eventual OIA champion.

Seeded first in the OIA tournament, the keglers lost to the experienced Bulldogs in the second round. However, a win over the Aiea Aliis gave the Tigers the runner-up position and a spot in the state tourney.

The Micks kept up the faith during the state tournament, taking second in the consolation bracket. Coach Craig Tokumura made his return as the Micks’ coach and took the Tigers from the low placing of last year to one of the top teams in the OIA.