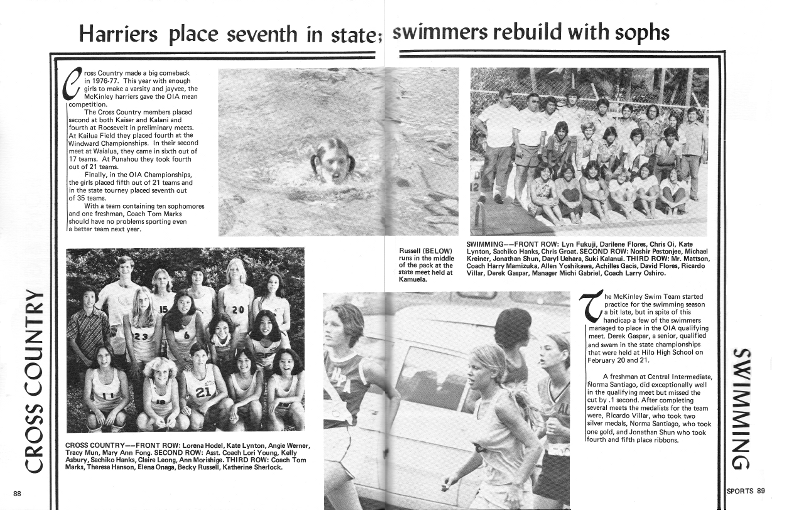 Cross Country made a big comeback in 1976-77. This year with enough girls to make a varsity and jayvee, the McKinley harriers gave the OIA mean competition.

The Cross Country members placed second at both Kaiser and Kalani and fourth at Roosevelt in preliminary meets. At Kailua Field they placed fourth at the Windward Championships. In their second meet at Waialua, they came in sixth out of 17 teams. At Punahou, they took fourth out of 21 teams.

Finally, in the OIA Championships, the girls placed 5th out of 21 teams and in the state tourney placed seventh out of 35 teams.

With a team containing ten sophomores and one freshman, Coach Tom Marks should have no problems sporting even a better team next year.

The McKinley Swim Team started practice for the swimming season a bit late, but in spite of this handicap a few of the swimmers managed to place in the OIA qualifying meet. Derek Gaspar, a senior, qualified and swam in the state championships that were held at Hilo High School on February 20 and 21.

A freshman at Central Intermediate, Norma Santiago, did exceptionally well in the qualifying meet but missed the cut by .1 second. After completing several meets the medalists for the team were, Ricardo Villar, who took two silver medals, Norma Santiago, who took one gold, and Jonathan Shun who took fourth and fifth place ribbons.