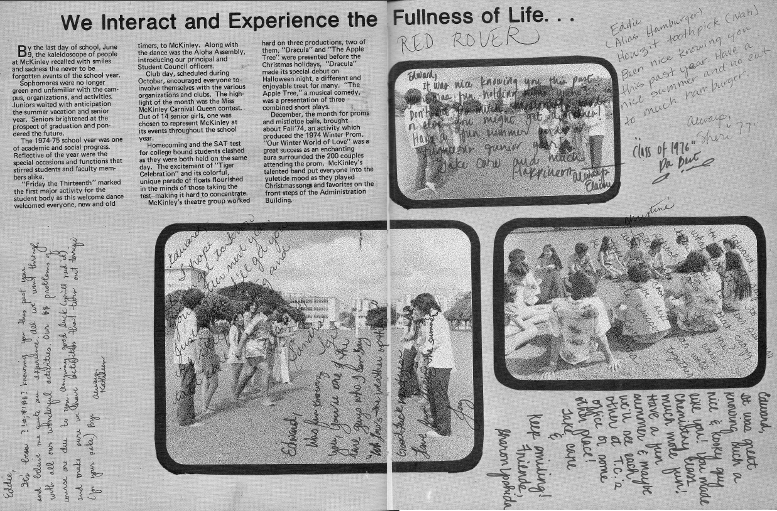 We Interact and Experience the Fullness of Life...

By the last day of school, June 9, the kaleidoscope of people at McKinley recalled with smiles and sadness the never to be forgotten events of the school year.

Sophomores were no longer green and unfamiliar with the campus, organizations, and activities. Juniors waited with anticipation the summer vacation and senior year.  Seniors brightened at the prospect of graduation and pondered the future.

The 1974-75 school year was one of academic and social progress.  Reflective of the year were the special occasions and functions that stirred students and faculty members alike.

"Friday the Thirteenth" marked the first major activity for the student body as this welcome dance welcomed everyone, new and old timers, to McKinley. Along with the dance was the Aloha Assembly, introducing our principal and Student Council Officers.

Club day, scheduled during October, encouraged everyone to involve themselves with the various organizations and clubs.  The highlight of the month was the Miss McKinley Carnival Queen contest. Out of 14 senior girls, one was chosen to represent McKinley at its events throughout the school year.

Homecoming and the SAT test for college bound students clashed as they were both held on the same day. The excitement of "Tiger Celebration" and its colorful, unique parade of floats flourished in the minds of those taking the test--making it hard to concentrate.

McKinley's theatre group worked hard on three productions, two of them, "Dracula" and "The Apple Tree" were presented before the Christmas holidays, "Dracula" made its special debut on Halloween night, a different and enjoyable treat for many. "The Apple Tree," a musical comedy, was a presentation of three combined short plays.

December, the month for proms and mistletoe balls, brought about Fall '74, an activity which produced the 1974 Winter Prom. "Our Winter World of Love" was a great success as an enchanting aura surrounded the 200 couples attending the prom. McKinley's talented band put everybody in the yuletide mood as they played Christmas songs and favorites on the front steps of the Administration Building.