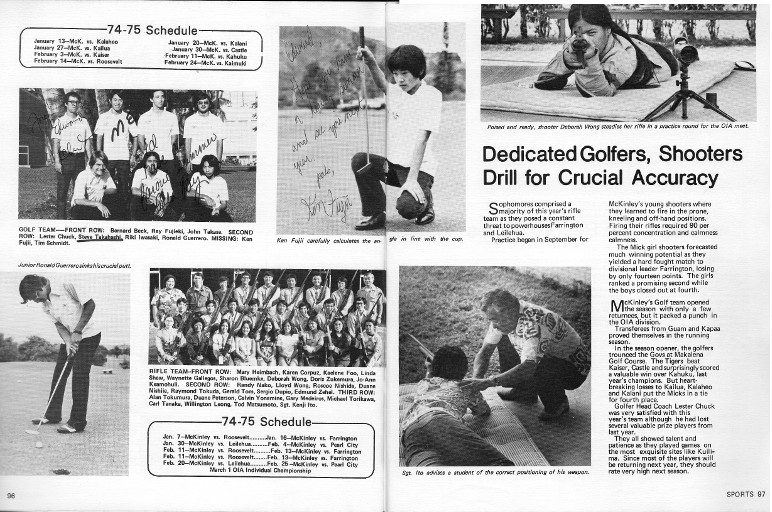 Sophomores comprised a majority of this year's rifle team as they posed a constant threat to powerhouses Farrington and Leilehua.

Practice began in September for McKinley's young shooters where they learned to fire in the prone, kneeling and off-hand positions. Firing their rifles required 90 percent concentration and calmness.

The Mick girl shooters forecasted much winning potential as they yielded a hard fought match to divisional leader Farrington, losing by only fourteen points. The girls ranked a promising second while the boys closed out a at fourth.

McKinley's Golf team opened the season with only a few returnees, but it packed a punch in the OIA division.
Transferees from Guam and Kapaa proved themselves in the running season.

In the season opener, the golfers trounced the Govs at Makalena Golf Course. The Tigers beat Kaiser, Castle and surprisingly scored a valuable win over Kahuku, last year's champions. But heartbreaking losses to Kailua, Kalaheo and Kalani put the Micks in a tie for fourth place.

Golfer Head Coach Lester Chuck was very satisfied with this year's team although he had lost several valuable prize players from last year.

They all showed talent and patience as they played games on the most exquisite sites like Kuilima. Since most of the players will be returning next year, they should rate very high next season.