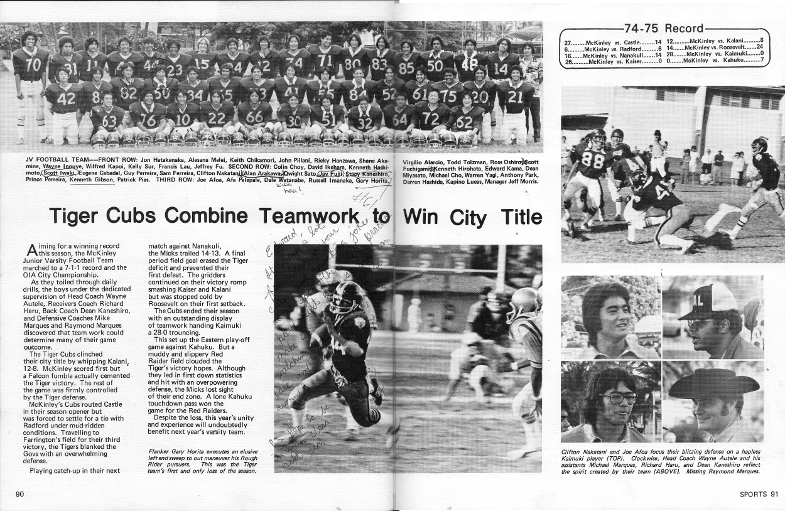 Aiming for a winning record this season, the McKinley Junior Varsity Football Team marched to a 7-1-1 record and the OIA City Championship.

As they toiled through daily drills, the boys under the dedicated supervision of Head Coach Wayne Autele, Receivers Coach Richard Haru, Back Coach Dean Kaneshiro, and Defensive Coaches Mike Marques and Raymond Marques discovered that team work could determine many of their game outcome.

The Tiger Cubs clinched their city title by whipping Kalani, 12-8. McKinley scored first but a Falcon fumble actually cemented the Tiger victory. The rest of the game was firmly controlled by the Tiger defense.

McKinley's Cubs routed Castle in their season opener but was forced to settle for a tie with Radford under mud-ridden conditions. Travelling to Farrington's field for their third victory, the Tigers blanked the Govs with an overwhelming defense.

Playing catch-up in their next match against Nanakuli, the Micks trailed 14-13. A final period field goal erased the Tiger deficit and prevented their first defeat. The gridders continued on the victory romp smashing Kaiser and Kalani but was stopped cold by Roosevelt on their first setback.

The Cubs ended their season with an outstanding display of teamwork handing Kaimuki a 28-0 trouncing.

This set up the Eastern play-off game against Kahuku. But a muddy and slippery Red Raider field clouded the Tiger's victory hopes. Although they led in first down statistics and hit with an overpowering defense, the Micks lost sight of their end zone. A lone Kahuku touchdown pass won the game for the Red Raiders.

Despite the loss, this year's unity and experience will undoubtedly benefit next year's varsity team.