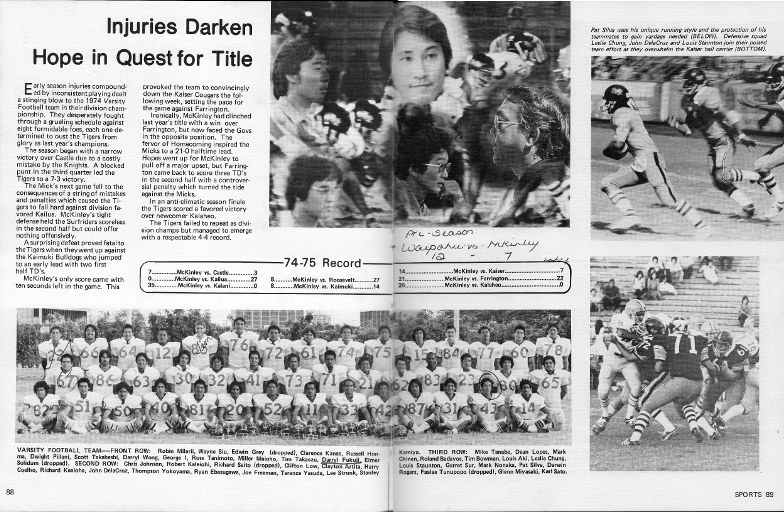 Early season injuries compounded by inconsistent playing dealt a stinging blow to the 1974 Varsity Football team in their division championship.  They desperately fought through a grueling schedule against eight formidable foes, each one determined to oust the Tigers from glory as last year's champions.

The season began with a narrow victory over Castle due to a costly mistake by the Knights. A blocked punt in the third quarter led the Tigers to a 7-3 victory.

The Mick's next game fell to the consequences of a string of mistakes and penalties which caused the Tigers to fall hard against division favored Kailua. McKinley's tight defense held the Surfriders scoreless in the second half but could offer nothing offensively.

A surprising defeat proved fatal to the Tigers when they went up against the Kaimuki Bulldogs who jumped to an early lead with two first half TD's.

McKinley's only score came with ten seconds left in the game. This provoked the team to convincingly down the Kaiser Cougars the following week, setting the pace for the game against Farrington.

Ironically, McKinley had clinched last year's title with a win over Farrington, but now faced the Govs in the opposite position. The fervor of Homecoming inspired the Micks to a 21-0 halftime lead. Hopes went up for McKinley to pull of a major upset, but Farrington came back to score three TD's in the second half with a controversial penalty which turned the tide against the Micks.

In an anti-climatic season finale the Tigers scored a favored victory over newcomer Kalaheo.

The Tigers failed to repeat as division champs but managed to emerge with a respectable 4-4 record.