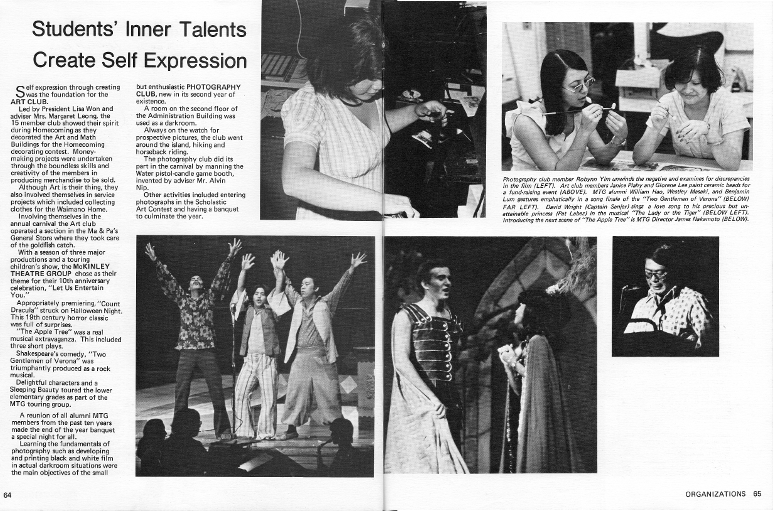 Self expression through creating was the foundation for the ART CLUB.

Led by President Lisa Won and adviser Mrs. Margaret Leong, the 15 member club showed their spirit during Homecoming as they decorated the Art and Math Buildings for the Homecoming decorating contest. Money making projects were undertaken through the boundless skills and creativity of the members in producing merchandise to be sold.

Although Art is their thing, they also involved themselves in service projects which included collecting clothes for the Waimano Home.

Involving themselves in the annual carnival, the Art club operated a section in the Ma & Pa's General Store where they took care of the goldfish catch.

With a season of three major productions and a touring children's show, the MCKINLEY THEATRE GROUP chose as their theme for their 10th anniversary celebration, "Let Us Entertain You."

"The Apple Tree" was a real musical extravaganza. This included three short plays.

Shakespeare's comedy, "Two Gentlemen of Verona" was triumphantly produced as a rock musical.

Delightful characters and a Sleeping Beauty toured the lower elementary grades as part of the MTG touring group.
A reunion of all alumni MTG members from the past ten years made the end of the year banquet a special night for all.

Learning the fundamentals of photography such as developing and printing black and white film in actual darkroom situations were the main objectives of the small but enthusiastic PHOTOGRAPHY CLUB, new in its second year of existence.

A room on the second floor of the Administration Building was used as a darkroom.

Always on the watch for prospective pictures, the club went around the island, hiking, and horseback riding. The photography club did its part in the carnival by manning the Water pistol-candle game booth, invented by adviser Mr. Alvin Nip.

Other activities included entering photographs in the Scholastic Art Contest and having a banquet to culminate the year.