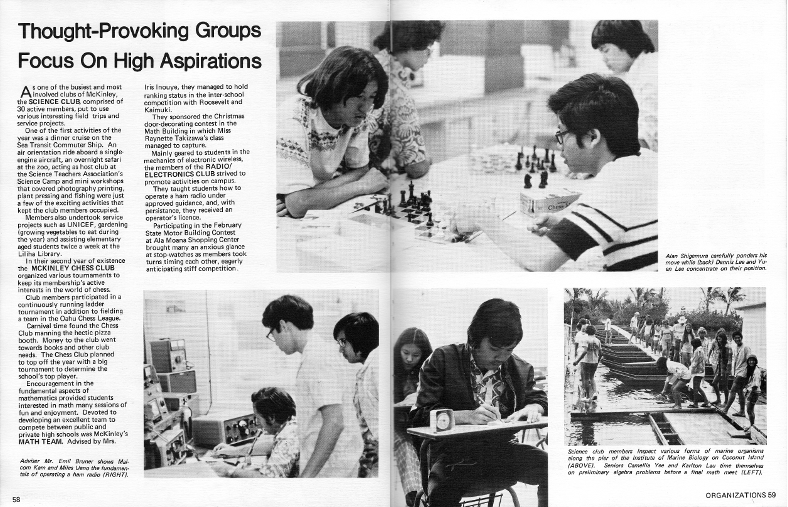 As one of the busiest and most involved clubs of McKinley, the SCIENCE CLUB, comprised of 30 active members, put to use various interesting field trips and service projects.

One of the first activities of the year was a dinner cruise on the Sea Transit Commuter Ship. An air orientation ride aboard single-engine aircraft, an overnight safari at the zoo, acting as host club at the Science Teachers Association's Science Camp and mini workshops that covered photography printing, plant pressing and fishing were just a few of the exciting activities that kept the club members occupied.

Members also undertook service projects such as UNICEF, gardening (growing vegetables to eat during the year) and assisting elementary aged students twice a week at the Liliha Library.

In their second year of existence, the MCKINLEY CHESS CLUB organized various tournaments to keep its membership's active interests in the world of chess.

Club members participated in a continuously running ladder tournament in addition to fielding a team in the Oahu Chess League.

Carnival time found the Chess Club manning the hectic pizza booth. Money to the club went towards books and other club needs. The Chess Club planned to top off the year with a big tournament to determine the school's top player.

Encouragement in the fundamental aspects of mathematics provided students interested in math many sessions of fun and enjoyment. Devoted to developing an excellent team to compete between public and private high schools was McKinley's MATH TEAM. Advised by Mrs. Iris Inouye, they managed to hold ranking status in the inter-school competition with Roosevelt and Kaimuki.

They sponsored the Christmas door-decorating contest in the Math Building in which Miss Raynette Takizawa's class managed to capture.

Mainly geared to students in the mechanics of electronic wireless, the members of the RADIO/ELECTRONICS CLUB strived to promote activities on campus.

They taught students how to operate a ham radio under approved guidance, and with persistence, they received an operator's license.

Participating in the February State Motor Building Contest at Ala Moana Shopping Center brought many an anxious glance at stop-watches as members took turns timing each other, eagerly anticipating stiff competition.