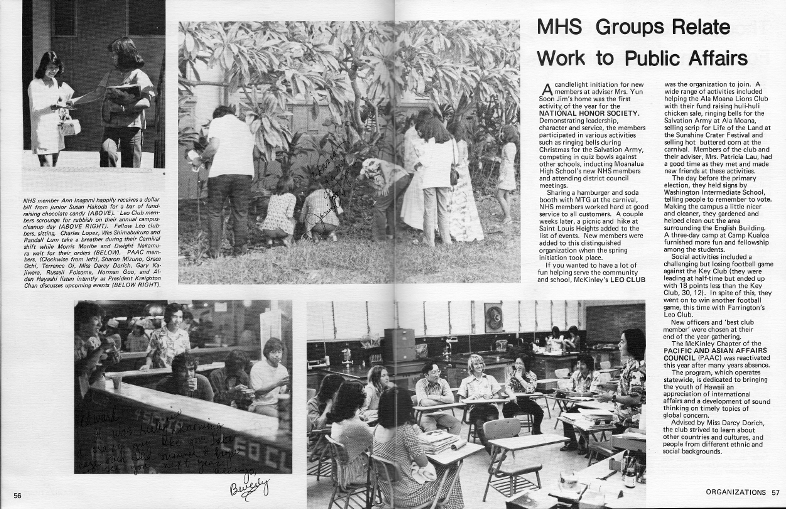 A candlelight initiation for new members at adviser Mrs. Yun Soon Jim's home was the first activity of the year for the NATIONAL HONOR SOCIETY. Demonstrating leadership, character and service, the members participated in various activities such as ringing bells during Christmas for the Salvation Army, competing in quiz bowls against other schools, inducting Moanalua High School's new NHS members and attending district council meetings.

Sharing a hamburger and soda booth with MTG at the carnival, NHS members worked hard at good service to all customers. A couple weeks later, a picnic and hike at Saint Louis Heights added to the list of events. New members were added to this distinguished organization when the spring initiation took place.

If you wanted to have a lot of fun helping serve the community and school, McKinley's LEO CLUB was the organization to join. A wide range of activities included helping the Ala Moana Lions Club with their fund raising huli-huli chicken sale, ringing bells for the Salvation Army at Ala Moana, selling scrip for Life of the Land at the Sunshine Crater Festival and selling hot buttered corn at the carnival. Members of the club and their adviser, Mrs. Patricia Lau, had a good time as they met and made new friends at these activities.

The day before the primary election, they held signs by Washington Intermediate School, telling people to remember to vote. Making the campus a little nicer and cleaner, they gardened and helped clean out the area surrounding the English Building. A three-day camp at Camp Kualoa furnished more fun and fellowship among the students.
Social activities included a challenging but losing football game against the Key Club (they were leading at half-time but ended up with 18 points less than the Key Club, 30-12). In spite of this, they went to win another football game, this time with Farrington's Leo Club.

New officers and 'best club member' were chosen at their end of the year gathering.

The McKinley Chapter of the PACIFIC AND ASIAN AFFAIRS COUNCIL (PAAC) was reactivated this year after many years of absence.

The program, which operates statewide, is dedicated to bringing the youth of Hawaii an appreciation of international affairs and a development of sound thinking on timely topics of global concern.

Advised by Miss Darcy Dorich, the club strived to learn about other countries and cultures, and people from different ethnic and social backgrounds.