As September rolled in the words 'get involved' spread through the students of the Class of 1978. And throughout the year that's exactly what the officers and council strived for... involvement.
With the class game opening the list of events planned, a victory over the Nanakuli Hawks, 14-0 proved to be a very exciting and happy event for all.
Following the homecoming festivities, "Friends," the class luau and first stag affair was a big success. Fun skits and a handful of homegrown talent were part of the unforgettable night.
Manpower and creativity were the key words in building up the Class of '78's carnival booth. Enthusiasm plus spirit made the booth worthwhile.
To signify the closing of their second year as McKinleyites, the juniors participated in various activities held during their class day. Themed, 'Welcome to Our World,' the celebration took place on Friday, April 22.
And finally, climaxing the junior year was the long awaited junior promenade. 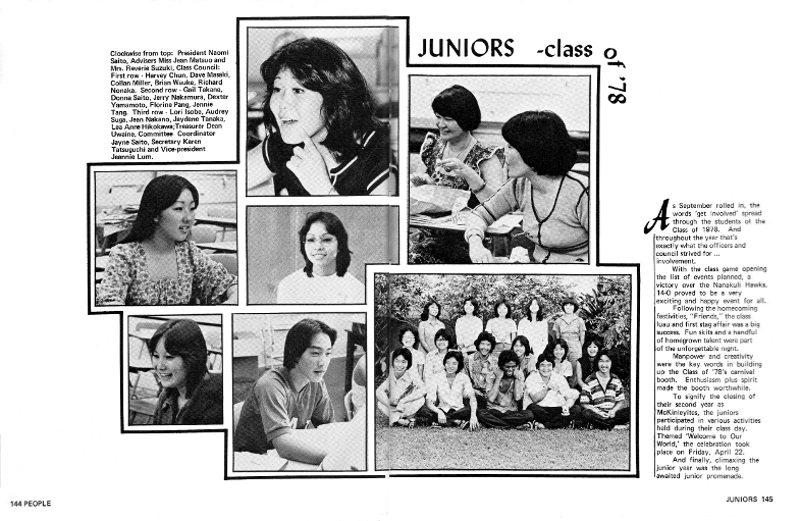 Sporting their vivid yellow and black shirts and burgundy and white "Junior Class Game" ribbons, the Class of '78 turned out en masse to watch the Tigers triumph over the Golden Hawks, 14-0 on October 8 at the Nanakuli Field.
The class game activities got off to a superb start as the junior, proving once and for all that they did indeed have that spirit, walked off with first place in the competition yells at the pep rally held earlier in the gym.
The class was let on to their victory with the help of the Junior Class Pep Squad. The squad, made up of eight vivacious girls, included pep-coordinator - Kimberly Ota, songleaders - Sharon Subeldia, Roxanne Subeldia, and Joanne Nakamura, and cheerleaders, Sharon Kim, Chloe Nakamatsu, Donna Tokumoto, and Debbie Cantere. 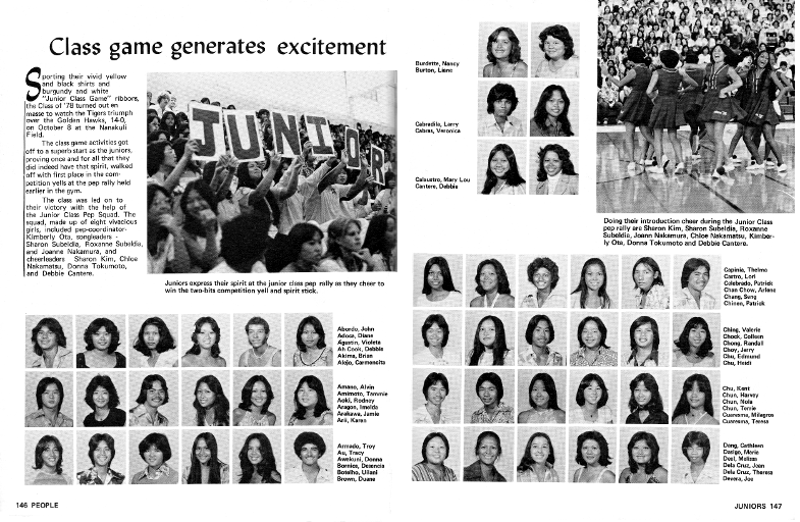 One hundred juniors gathered at Kaneda's on November 13 for their class luau. Setting off the evening, a randomly picked court was announced. After a lavish luau buffet, "homegrown" entertainment was featured along with door prizes and a very offbeat version of "Cinderella" presented by junior senate members.
Luau chairperson was Audrey Suga, advised by Mr. Raymond Chung. Chaperones included Mrs. Tomie Ahn, Mrs. Bernice and Mr. Bob Jacobsen. 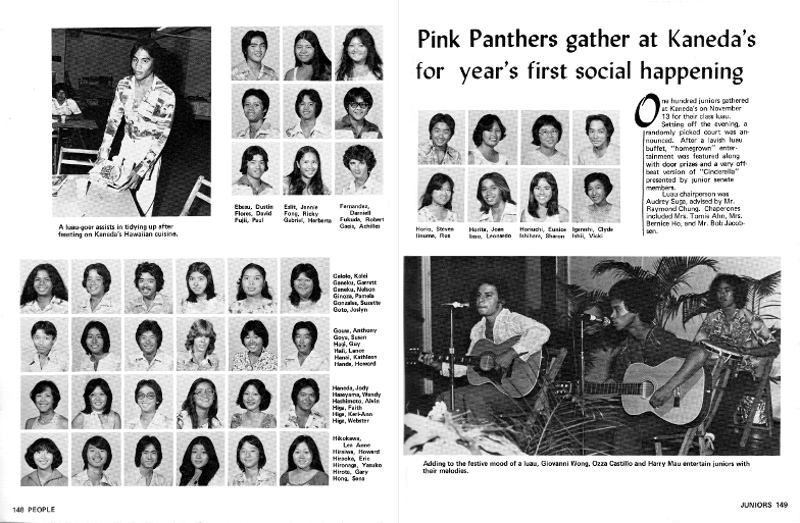 Hard work, determination and a lot of spirit proved to be the main factors in making the '76 Homecoming a success for the Class of '78.
The juniors kicked off their Homecoming activities by holding tapestry workshops after school and on Election Day. The workshops often lasted late into the night as juniors worked vigorously to meet their deadlines for the approaching Homecoming game.
Although placing fifth with their tapestry entitle "Imua Tigers" (forward Tigers) and coming in last during the Homecoming competitions, the juniors' did not let this dampen their spirits.
At the game against Farrington, the juniors, wearing their new t-shirts, enthusiastically cheered the Tigers on.
The junior tapestry was let by co-chairmen Jaydene Tanaka and Dexter Yamamoto as they paraded around the field at the Aloha Stadium.
Mr. Neal Takamori served as the junior Homecoming adviser. 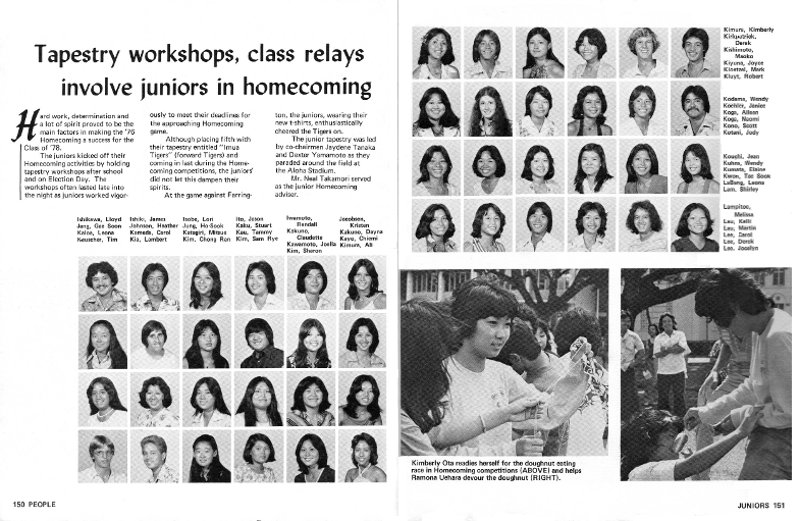