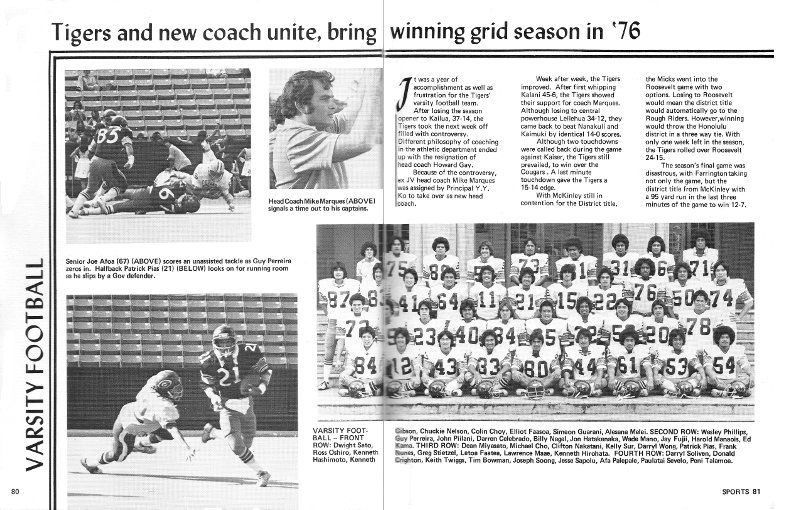 It was a year of accomplishment as well as frustration for the Tigers' varsity football team. After losing the season opener to Kailua 37-14, the Tigers took the next week off filled with controversy. Different philosophy in coaching in the athletic department ended in the resignation of head coach Howard Gay.

Because of the controversy, ex JV head coach Mike Marques was assigned by Principal Y.Y. Ko to take over as new head coach.

Week after week, the Tigers improved. After first whipping Kalani 45-6, the Tigers showed their support for coach Marques. Although losing to central powerhouse Leilehua 34-12, they came back to beat Nanakuli and Kaimuki by identical 14-0 scores.

Although two touchdowns were called back during the game against Kaiser, the Tigers still prevailed, to win over the Cougars. A last minute touchdown gave the Tigers a 15-14 edge.

With McKinley still in contention for the District title, the Micks went into the Roosevelt game with two options. Losing to Roosevelt would mean the district title would automatically go to the Rough Riders. However, winning would throw the Honolulu district in a three way tie. With only one week left in the season, the Tigers rolled over Roosevelt 24-15.

The season's final game was disastrous, with Farrington taking not only the game, but the district title from McKinley with a 95 yard run in the last three minutes of the game to win 12-7.