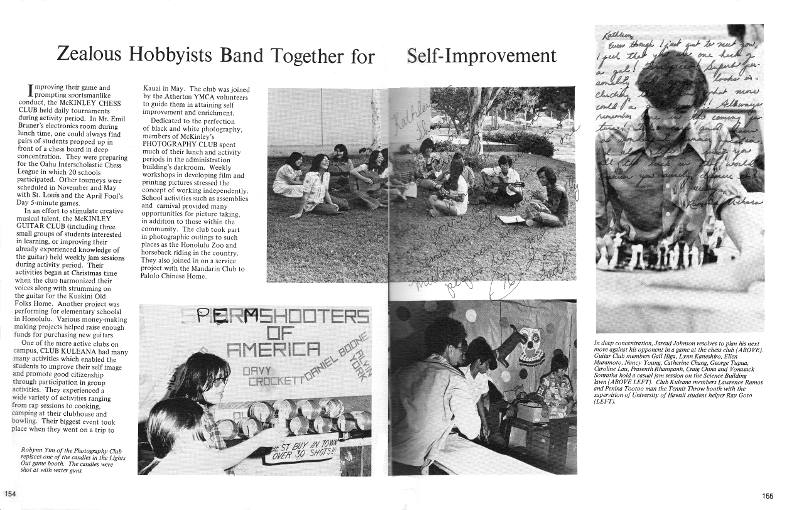 Zealous Hobbyists Band Together for Self-Improvement

Improving their game and prompting sportsmanlike conduct, the McKINLEY CHESS CLUB held daily tournaments during activity period. In Mr. Emil Bruner's electronics room during lunch time, one could always find pairs of students propped up in front of a chess board in deep concentration. They were preparing for the Oahu Interscholastic Chess League in which 20 schools participated. Other tourneys were scheduled in November and May with St. Louis and the April Fool's Day 5-minute games.

In an effort to stimulate creative musical talent, the McKINLEY GUITAR CLUB (including three small groups of students interested in learning, or improving their already experienced knowledge of the guitar) held weekly jam sessions during activity period. Their activities began at Christmas time when the club harmonized their voices along with strumming on the guitar for the Kuakini Old Folks Home. Another project was performing for elementary schools in Honolulu. Various money-making projects helped raise enough funds for purchasing new guitars.

One of the more active clubs on campus, CLUB KULEANA had many activities which enabled the students to improve their self image and promote good citizenship through participation in group activities. They experienced a wide variety of activities ranging from rap sessions to cooking, camping at their clubhouse and bowling. Their biggest event took place when they went on a trip to Kauai in May. The club was joined by the Atherton YMCA volunteers to guide them in attaining self improvement and enrichment.

Dedicated to the perfection of black and white photography, members of McKinley's PHOTOGRAPHY CLUB spent much of their lunch and activity periods in the administration building's darkroom. Weekly workshops in developing film and printing pictures stressed the concept of working independently. School activities such as assemblies and carnival provided many opportunities for picture taking, in addition to those within the community. The club took part in photographic outings to such places as the Honolulu Zoo and horseback riding in the country. They also joined in on a service project with the Mandarin Club to Palolo Chinese Home.