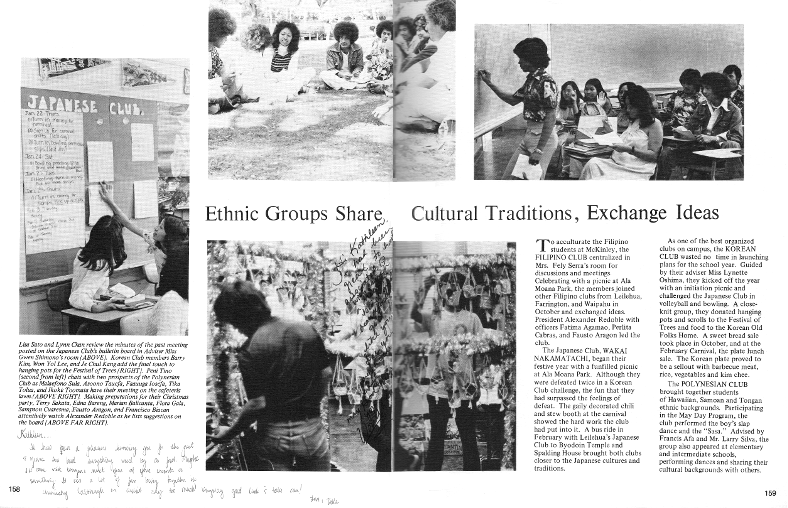 To acculturate the Filipino students at McKinley, the FILIPINO CLUB centralized in Mrs. Fely Serra's room for discussions and meetings. Celebrating with a picnic at Ala Moana Park, the members joined other Filipino clubs from Leilehua, Farrington and Waipahu in October and exchanged ideas. President Alexander Redoble with officers Fatima Agamao, Perlita Cabras, and Fausto Aragon led the club.

The Japanese Club, WAKAI NAKAMATACHI, began their festive year with a funfilled picnic at Ala Moana Park. Although they were defeated twice in a Korean Club challenge, the fun that they had surpassed the feelings of defeat. The gaily decorated chili and stew booth at the carnival showed the hard work the club had put into it. A bus ride in February with Leilehua's Japanese Club to Byodoin Temple and Spalding House brought both clubs closer to the Japanese cultures and traditions.

As one of the best organized clubs on campus, the KOREAN CLUB wasted no time in launching plans for the school year. Guided by their adviser Miss Lynette Oshima, they kicked off the year with an initiation picnic and challenged the Japanese Club in volleyball and bowling. A close-knit group, they donated hanging pots and scrolls to the Festival of Trees and food to the Korean Old Folks Home. A sweet bread sale took place in October, and at the February Carnival, the plate lunch sale. The Korean plate proved to be a sellout with barbecue meat, rice, vegetables and kim chee.

The POLYNESIAN CLUB brought together students of Hawaiian, Samoan and Tongan ethnic backgrounds. Participating in the May Day Program, the club performed the boy's slap dance and the "Sasa." Advised by Francis Afa and Mr. Larry Silva, the group also appeared at elementary and intermediate schools, performing dances and sharing their cultural backgrounds with others.