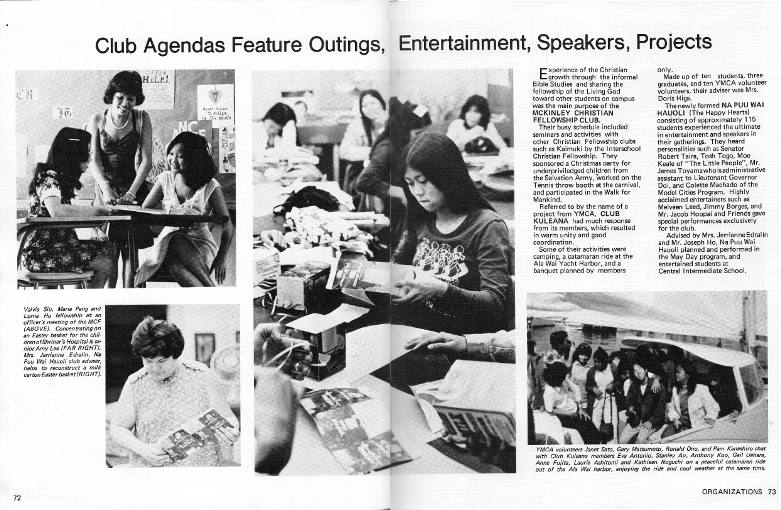 Experience of The Christian growth through the informal Bible Studies and sharing the fellowship of the Living God toward other students on campus was the main purpose of the MCKINLEY CHRISTIAN FELLOWSHIP CLUB.

Their busy schedule included seminars and activities with other Christian Fellowship clubs such as Kaimuki by the Interschool Christian Fellowship. They sponsored a Christmas party for underpriviledged children from the Salvation Army, worked on the Tennis throw booth at the carnival, and participated in the Walk for Mankind.

Referred to by name of a project from YMCA, CLUB KULEANA had much response from its members, which resulted in warm unity and good coordination.

Some of their activities were camping, a catamaran ride at the Ala Wai Yacht Harbor, and a banquet planned by members only.

Made up of ten students, three graduates, and ten YMCA volunteers, their adviser was Mrs. Doris Higa.

The new formed NA PUU WAI HAUOLI (The Happy Hearts) consisting of approximately 115 students experienced the ultimate in entertainment and speakers in their gatherings. They heard personalities such as Senator Robert Taira, Tosh Togo, Moe Keale of "The Little People", Mr. James Toyama, who is administrative assistant to Lieutenant Governor Doi, and Colette Machado of the Model Cities Program. Highly acclaimed entertainers such as Melveen Leed, Jimmy Borges and Mr. Jacob Hoopai and Friends gave special performances exclusively for the club.