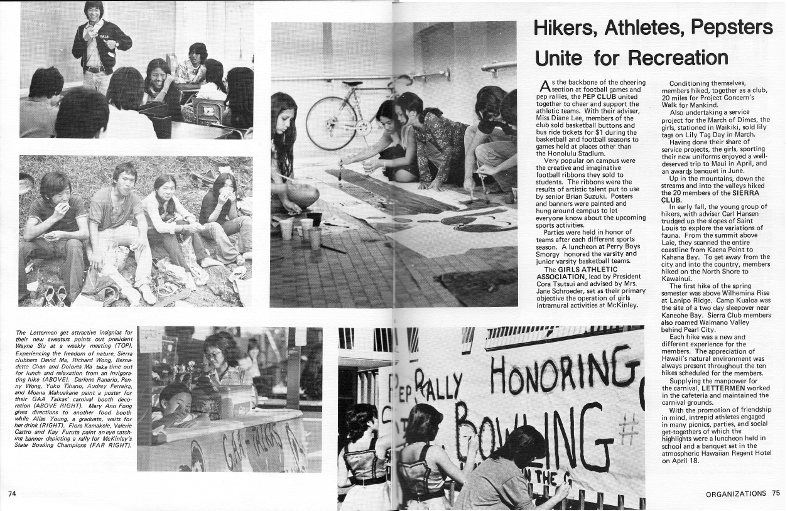 As the backbone of the cheering section at football games and pep rallies, the PEP CLUB united together to cheer and support the athletic teams.  With their adviser, Miss Diane Lee, members of the club sold basketball buttons and bus ride tickets for $1 during the basketball and football seasons to games held at places other than the Honolulu Stadium.

Very popular on campus were the creative and imaginative football ribbons they sold to students. The ribbons were the results of artistic talent put to use by senior Brian Suzuki. Posters and banners were painted and hung around camps to let everyone know about the upcoming sports activities.

Parties were held in honor of teams after each different sports season. A luncheon at Perry Boys Smorgy honored the varsity and junior varsity basketball teams.

The GIRLS ATHLETIC ASSOCIATION, lead by President Cora Tsutsui and advised by Mrs. Jane Schroeder, set as their primary objective the operation of girls intramural activities at McKinley.

Conditioning themselves, members hiked, together as a club, 20 miles for Project Concern's Walk for Mankind.

Also undertaking a service project for the March of Dimes, the girls, stationed in Waikiki, sold lily tags on Lily Tag Day in March.

Having done their share of service projects, the girls, sporting their new uniforms enjoyed a well deserved trip to Maui in April and an awards banquet in June.

Up in the mountains, down the streams and into the valleys hiked the 20 members of the SIERRA CLUB.

In early fall, the young group of hikers, with adviser Carl Hansen trudged up the slopes of Saint Louis to explore the variations of fauna. From the summit above Laie, they scanned the entire coastline from Kaena Point to Kahana Bay. To get away from the city and into the country, members hiked on the North Shore to Kawainui.

The first hike of the spring semester was above Wilhemina Rise at Lanipo Ridge. Camp Kualoa was the site of a two day sleepover near Kaneohe Bay. Sierra Club members also roamed Waimano Valley behind Pearl City.

Each hike was a new and different experience for the members. The appreciation of Hawaii's natural environment was always present throughout the ten hikes scheduled for the members.

Supplying the manpower for the carnival, LETTERMEN worked in cafeteria and maintained the carnival grounds.

With the promotion of friendship in mind, intrepid athletes engaged in many picnics, parties, and social get-togethers of which the highlights were a luncheon held in school and a banquet set in the atmospheric Hawaiian Regent Hotel on April 18.