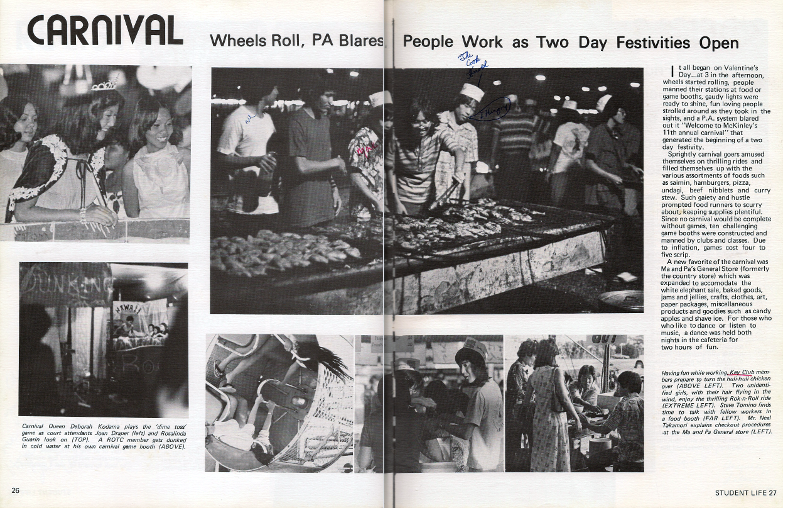 It all began on Valentine's Day...at 3 in the afternoon, wheels started rolling, people manned their stations at food or game booths, gaudy lights were ready to shine, fun loving people strolled around as they took in the sights, and a P.A. system blared out it "Welcome to McKinley's 11th annual carnival" that generated the beginning of a two day festival.

Sprightly carnival goes amused themselves on thrilling rides and filled themselves up with the various assortments of foods such as saimin, hamburgers, pizza, undagi, beef nibblets and curry stew. Such gaiety and hustle prompted food runners to scurry about, keeping supplies plentiful. Since no carnival would be complete without games, ten challenging game booths were constructed and manned by clubs and classes. Due to inflation, games cost four to five scrip.

A new favorite of the carnival was the Ma and Pa's General Store (formerly the country store) which was expanded to accommodate the white elephant sale, baked goods, jams and jellies, crafts, clothes, art, paper products and goodies such as candy apples and shave ice. For those who like to dance or listen to music, a dance was held both nights in the cafeteria for two hours of fun.